Warning: Use of undefined constant core_mods - assumed 'core_mods' (this will throw an Error in a future version of PHP) in /home/bestnort/public_html/wp-content/themes/bestnorthshore/functions.php on line 14

No-wax skis: The cure for the Woodland Goodies faceplant 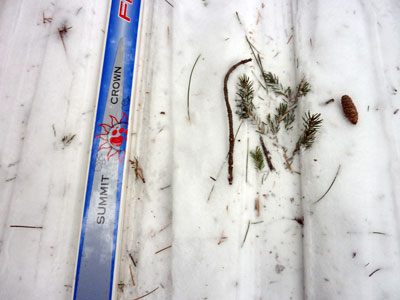 It’s spring! Time to break out your fish scales. No, not the device to weigh your catch of walleye. I mean the skis you have with the grippy surface underfoot.

It’s March 1, the start of meteorological spring, and there is still a whole lot of snow on the North Shore. The ski season could go on for at least another month. But it’s time to swap speed for sanity…and safety.

The main reason people use no-wax skis is convenience. You just put them on and go. You don’t have to worry about what kick wax to use. You do sacrifice speed, as the grippy fish scales slow down your glide.

Another reason to use no-wax skis is that it’s maddeningly difficult to wax properly when the temperature is above freezing. That involves using klister, a goopy syrup that reminds me of modeling glue. 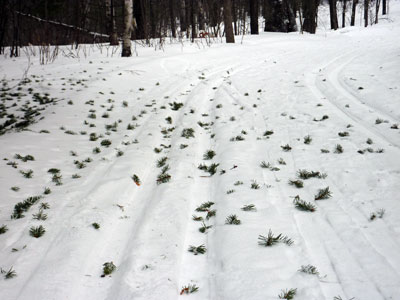 Lately, however, I’ve come to appreciate my no-wax skis for a third factor: woodland goodies. In spring, with the warm winds and drying forest, the trails get littered with needles, leaves and bark from the trees. Since trail grooming slows down in March, this natural debris stacks up. Ski through  a needle-ridden, leafy ski track with sticky kick wax and so much vegetative matter will cling to the bottom of your skis that you may as well have fish scales on your skis instead. Except a piece of bark will catch your skis from going forward at all and you may end up doing a faceplant.

With no-wax skis, you just glide over the needles and ski on.

I spent most of March in 1996 skiing North Shore trails with no-wax skis, as Sally and I researched our first North Shore ski book. I have fond memories of sunny days in open glades discovering new trails from Tofte to Grand Portage. Whatever speed I lost on those no-wax skis was more than compensated for by the fun and ease. And I don’t think I had a single faceplant.


Warning: Use of undefined constant BASE_URL - assumed 'BASE_URL' (this will throw an Error in a future version of PHP) in /home/bestnort/public_html/wp-content/themes/bestnorthshore/single-old.php on line 57