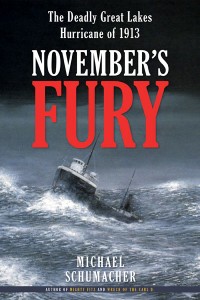 I find there’s nothing quite as enjoyable as reading a book about nature at its most violent…especially when safely settled in a comfortable chair with a hot drink and an afghan. November’s Fury: The Deadly Great Lakes Hurricane of 1913 is a well-told story of a monster storm that will give you renewed respect and admiration for those who work on the Great Lakes.

November is famously treacherous on Lake Superior, but the storm that Michael Schumacher recounts in November’s Fury still stands in the records as the deadliest storm in Great Lakes history. The massive storm that roared for three days from November 7 to 10, 1913 took hundreds of lives, sank 19 ships, grounded 31, and damaged many more. On Lake Superior, 2 ships went down with 43 lives lost. 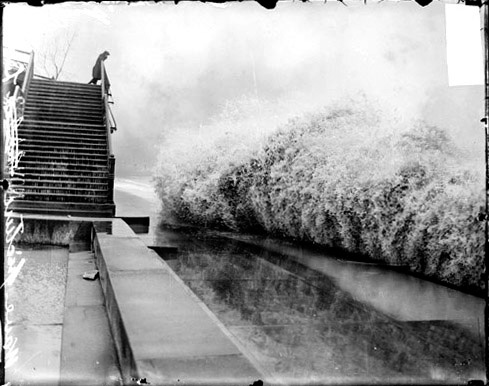 During the 1913 storm, a wave breaks on the shore of Lake Michigan in Chicago.

The storm of 1913 has been referred to as a “white hurricane;” a freakishly destructive convergence of weather disturbances that hurled rain, sleet, snow, slashing winds and monster waves across the Great Lakes from Lake Superior’s Port Arthur (now Thunder Bay) to Rochester, NY on Lake Huron. Schumacher, who has written 12 books about Great Lakes shipwrecks and lighthouses, does a masterful job of placing the events of 1913 into context. Only eight years earlier, the Mataafa—a 430-foot “straight-decker” towing a barge loaded with iron ore—practically broke in two when it was slammed against a pier near the Duluth ship canal during a November storm. 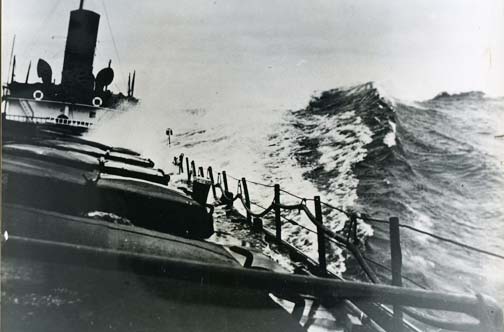 The Storm of 1913 was also known as The Big Blow, The Freshwater Fury, or The White Hurricane. It was a blizzard with hurricane-force winds.

Great Lakes shipping in the early 1900s was a low-tech enterprise. Sailors navigated by compass and determined depth by dropping lead to the floor of the lake. Some of the newer ships had telegraph equipment and all were powered by coal. New ship designs allowed for more capacity for cargo, including the cigar-shaped whaleback design (learn more about this ship design at the SS Meteor Whaleback Museum in Superior, WI), and the straight-decker which featured deckhouses at the front and the back of the boat, with a huge cargo area in the middle. These ships were considered to be quite strong and able to withstand the choppy waves of a Great Lakes storm. 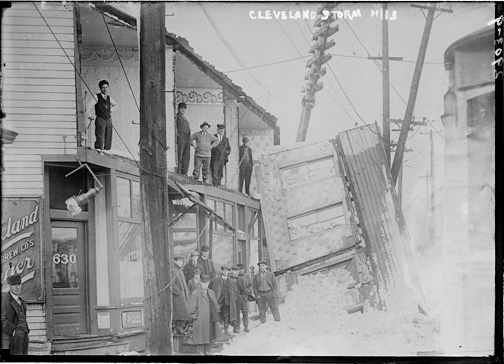 With November as the last month of the shipping season, ship captains were always under pressure to make one more delivery of wheat, flax, iron ore, or other cargo. They weighed financial concerns against the weather, and often they chose (or were strongly encouraged by the shipping company) to sail even in the face of bad weather. As the temperature and the barometric pressure dropped, the Weather Bureau in Washington D.C. (now called the National Weather Service) issued gale warnings, but there was a chance the storm would graze the lower Great Lakes and head more southerly.

For weeks after the storm, bodies and items washed up on Great Lakes shores.

For weeks after the storm, bodies and items washed up on Great Lakes shores.

Warnings were posted in Great Lakes ports: eight-foot-by-eight-foot red flags with a black square in the center. A second flag indicating wind direction flew with it, and at night, the flags were lit by lanterns. Although the Weather Bureau had an official posting for a freshwater hurricane–two red flags with black squares—there was a reluctance to use it.

Was the storm of 1913 a hurricane? The Duluth News Tribune thought so. Although the word had never been applied to a storm on the Great Lakes, the newspaper editorialized in the storm’s aftermath: “Captains and vessels arriving in the Duluth-Superior harbor since the memorable storm say that a display of hurricane warnings instead of the usual storm warnings undoubtedly would have prevented any such large loss of life.” 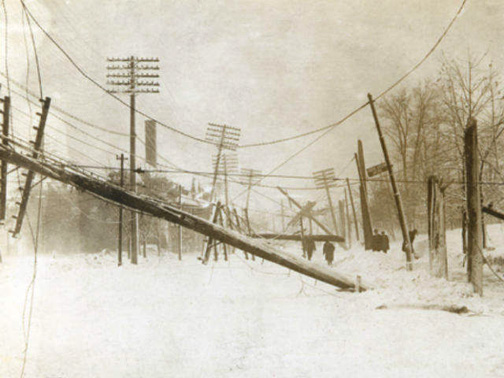 Cleveland was perhaps the hardest-hit city by the deadly 1913 storm.

The hurricane posting might have aided Captain Jimmy Owen, who voiced concerned about the weather while the 525-foot Henry B. Smith was being loaded with iron ore at the Marquette, Michigan dock. As Schumacher tells it, eyewitness accounts state that “it was so cold the iron froze in the hopper cars and loading chutes. Dockworkers had to pound it with sledgehammers.”

The story goes that the Smith’s owners in Cleveland threatened to fire Owen if he didn’t bring the ship and its cargo in on time, despite the weather. While other captains watched and speculated on Owen’s decision from the port, the Smith sailed out of view in a blinding snowstorm.

Schumacher follows the fate of the captains and crews out on the Great Lakes over this three day period in moving and fascinating detail. The book is illustrated with photos, illustrations, maps and tables. Some of the photos can be quite touching—a heartbreaking photo of a pile of life jackets stacked up against a funeral parlor in a town on Lake Huron testifies to the loss of life. For weeks after the storm, bodies and items washed up on Great Lakes shores, even personal items such as pocket watches and diaries. Churches held services for unidentified sailors and some ships were never found.

Which brings us back to the Henry B. Smith. After the ship left port and the storm intensified, it disappeared. All that was recovered were two bodies and a small amount of wreckage. In 2013, three shipwreck hunters, armed with sonar, mapped out an area in Lake Superior near Marquette, Michigan in which they hoped to find the Smith. The ship was found resting at 535 feet. Schumacher writes:

“The boat had been cracked across the deck, and her bow appeared to list a bit, but they could not be certain if it was in two pieces….there was no doubt it was the legendary ship.”

Twenty-three sailors, including its captain Jimmy Owen, had died on that spot 100 years ago.

Read about the Great Lakes Storm of 1913 on Wikipedia.

All photos used above are copyright-free, in public domain.