The newspapers only knew her as “Mrs. Olson” of Two Harbors. Though her name may have been common, her suffering at the hands of Lake Superior was poignant and rare.

Her men were fishermen, and even before coming to the United States she had lost her husband, drowned off the coast of Sweden. One of her sons, John had drowned April 1910 in Grand Marais on his way to Isle Royale.

Now, in April 1911 her other son, Otto, was off to Isle Royale in the same boat. And there was no word from him; he was missing off the North Shore. 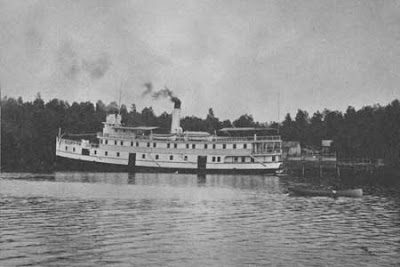 In the 1900s and early 1910s on the North Shore, information only traveled as fast as the boat, dogsled or runner bearing the letter. Telephone lines weren’t in yet between Duluth, Two Harbors and Grand Marais. The Booth Line’s steamer Easton was the main link North Shore communities had with each other and with the world. Imagine Mrs. Olson waiting for news of her son.

One can only imagine Mrs. Olson’s dread as days stretched into weeks without word. Radios were only recently introduced to Lake Superior’s larger ships, and smaller boats seldom had them. The steamer Easton had made two of its regular trips between Duluth and Isle Royale to collect the fish from the dozens of Island fishermen, and had seen no sign of the Olson party.

On April 14, 1911 the Duluth News-Tribune ran the headline “FISHERMEN ARE PROBABLY LOST ON NORTHSHORE.” The article explains that since the time the party left Grand Marais, “a strong wind has been blowing almost continuously from the northeast, and is considered by old sailors here more than probable that the small launch has been swamped and all aboard perished.”

But April 14 was also the day the Easton returned to Two Harbors from Isle Royale on its next trip, with news and mail from the island in addition to its load of fish.

The Easton carried a letter written a few days before by her son Otto. After leaving Grand Marais, the crew had stopped at Grand Portage and then reached the Susie Islands. The wind was so strong that they dared not make the fifteen-mile crossing to Isle Royale. They had “held” at Susie Island for four nights, waiting for the wind to drop.

Mrs. Olson: wife and mother of men who fish.

Although Mrs. Olson was no doubt very happy that day, I wish a much MUCH happier Mother’s Day to all this year!