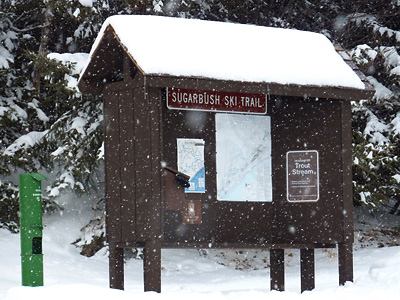 Twenty years ago, my wife Sally and I rolled down Highway 1 from Ely to the North Shore with our cross country skis for a weekend with my parents. I had never skied on big wide groomed ski trails before, only on the winding skier-packed trails of the Superior National Forest. We skied on the Sugarbush Trails, just inland from Tofte.

It was mind-blowing. I felt like I’d died and gone to heaven. I still remember the thrill of gliding down the well-groomed hairpin turns of the Sixmile Crossing trail. The view of Leveaux Peak rising above the fields in the snow is still burned on my retina. It was the best cross country skiing I’d ever had.

The Sugarbush trails still are the North Shore’s best. I get back there once or twice a year now, and every time it’s the highlight of the ski season for me. The trails are typically very well groomed and very well maintained.

I returned to the Sugarbush trails this week with my friend Bunter. Our goal (well, really my New Year’s resolution) was to ski the Picnic Loop, the 23-25 kilometer mega-loop through the heart of the Sugarbush system. We arrived at the Onion River Road parking lot in the midst of a perfect lake-effect snowfall, the woods and hills like they’re in a snow globe freshly shaken.

As excellent as the trail grooming is, there is no way they could keep up with five inches of freshly falling snow. Especially on a Monday, when the folks who live and work on the North Shore are recovering from another hard weekend serving the guests. So Bunter and I took off for the Picnic Loop breaking trail, following the faint indents of the last person through the previous day. 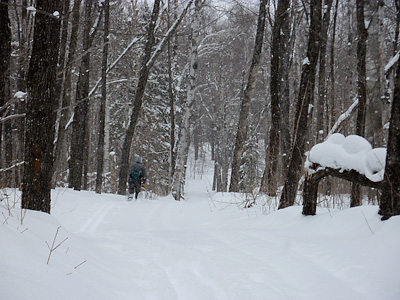 So much for excellent grooming. The going was slow. According to my GPS, we were covering three kilometers an hour. That would get us around the Picnic Loop in about eight hours. At dark.


We stopped for lunch up in the forest of huge maple and yellow birch trees atop the ridge of the Homestead Loop, light snow still falling. The GPS unit was not encouraging at all. The woods, like Robert Frost would say, “were lovely, dark and deep.” And we had miles to go before we’d sleep.


All sounds were muffled. Even the fish scales of our no-wax skis were quiet. The snow was deep enough and light enough that the tips of my skis stayed under the surface of the snow.


At the far end of the Homestead Loop, without even really discussing it, we made the turn away from the Picnic Loop and headed back to the car. 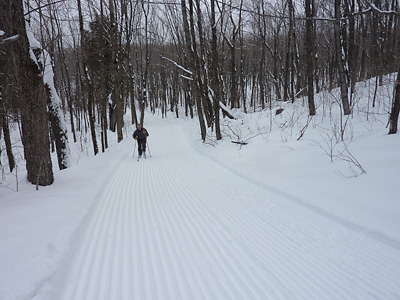 Finally, the Sugarbush groomer caught up with us. Since the snow was so light and fluffy, the groomer was “rolling” the trail first. Tired of breaking trail, we were glad to hear the groomer’s snowmobile coming toward us. But after that initial rolling, the trail was far more difficult to ski. The grooves were like cream cheese, and there was no way to keep our skis sliding forward without them sliding off one groove and into another.


Fortunately, the groomer turned off at the next fork, and we had our non-groomed trail back for the last three or four kilometers to the trailhead.


It was a great day of skiing. We skied hard for five hours, as long a time we’d hoped it would take to ski the whole Picnic Loop. And the irony was, as much as I love the well-groomed trails here, it was the ungroomed trails that made our day.


To ski these trails, we used the Onion River Road trailhead. From Highway 61 at mile marker 87.4, take Forest Road 336 (Onion River Road) 2.1 miles inland to the large parking lot. We skied the entire Homestead Loop, for a total of about 14 kilometers of skiing.