Warning: Declaration of AVH_Walker_CategoryDropdown::walk($elements, $max_depth) should be compatible with Walker::walk($elements, $max_depth, ...$args) in /home/bestnort/public_html/wp-content/plugins/extended-categories-widget/4.2/class/avh-ec.core.php on line 0
 On the trail of the Pagami Creek Fire in Ely, MN - Best North Shore - Best North Shore

On the trail of the Pagami Creek Fire

It was an unusually hot and dry day in May as we paddled toward the burned southern shore of Lake One in search of the famous Pagami Creek Fire. We’d put in our canoe early at the Lake One entry point (off Highway 169 east of Ely) with the intent of seeking burned shoreline, seeing up close what nature wrought during the 2011 fire.

Like so many people living in northern Minnesota, Andrew and I were riveted in late August and early September 2011 when this Boundary Waters Canoe Area Wilderness fire became record breaking in both intensity and speed in just a matter of one day. It dominated every news cycle as amazing stories emerged. Hotshot firefighters were called into Ely from around the country to help contain the destruction and put out the fire. Exciting and frightening stories were told of canoe campers barely escaping the hot flames with their lives — of campers taking cover under canoes in the middle of open water as the fire and flames roared everywhere around them. Even the firefighters were caught in extreme survival situations as the fire moved faster and hotter than any scientific models could predict; Insula Lake was the setting of incredible drama for forest service personnel who barely escaped. It was a fire of historical proportions.

We had always wanted to get in by canoe and see the burned landscape. So three years after the famous fire, we were finally out for a long day of paddling and discovery. 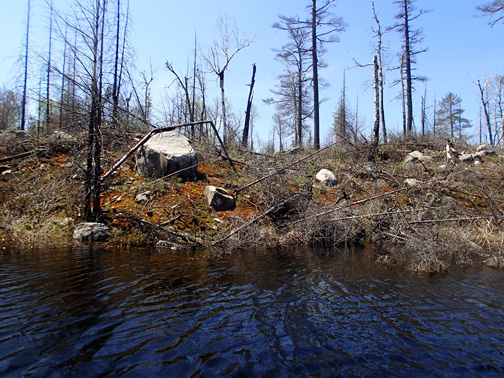 Fire-burned southern shoreline of Lake One in the BWCA

We’d already chatted with the Memorial weekend campers at the busy canoe landing, paddled past the families staying at Kawishiwi Lodge and teenagers sunning on the dock, and were now free of the crowds and on open water, moving toward the burned shoreline. We’d canoed past the occupied campsites on lovely Lake One and were alone, drifting, paddling and observing in the muskeg near the mouth of Pagami Creek. There is something very beautiful and startling about entering into an area that was recently burned. We noticed the slight scent of smoke, even three years later, as we moved upstream in a slight headwind. We were assaulted by the quiet — quiet that yielded a chorus of spring peepers, a huge variety of singing birds, and a beaver slapping its tail in the water ahead of us. An eagle circled toward its huge nest visible in a burned white pine above us. It was difficult to assimilate the vivid sounds of the wild all around us while viewing the devastation of the forest; while the land was alive with critters, the landscape appeared as a dull b&w photo. The granite boulders usually invisible underneath a carpeted forest floor were burned bare of any green moss or lichen and stood out like huge bleached bones. The trees that remained standing were tall, blackened skeletons. You could now see through the forest which was normally dense, green and impenetrable.

What must it have been like to be on the water right here in September 2011 during the raging inferno of heat and dark smoke, with searing wind gusts of 70 mph, the bright sunny day turned black as night, paddling for your life to escape an engulfing fire?

Drifting along on the creek now on such a lovely day, with gentle breezes and warm sun on our shoulders, made the experience all the more sobering to contemplate.

That evening, after a long and hot day paddling and taking pictures, we decided to read up on the fire. Though we could remember some of the stories, the more we learned the more we became riveted by the drama and magnitude of the event. 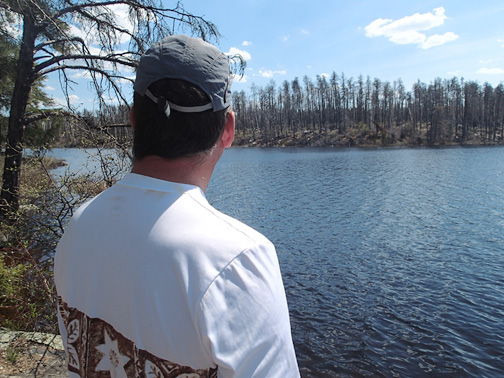 Looking from an unburned section of Lake Two toward fire-burned shoreline.

The Pagami Creek Fire began with a lightning strike on August 18, 2011 and grew slowly and harmlessly for weeks. Then, on September 12, everything “went to hell,” as one blogger wrote. During just one day, the fire traveled 16 miles to the east as hot, dry, windy weather moved in, breaking all fire prediction models and creating life and death situations for visitors and firefighting personnel. Ultimately, 100,000 acres were burned by mid-October. It was the largest fire in Minnesota since 1918 when the 250,000-acre fire near Cloquet killed 559 people. The huge 35,000 foot smoke plume drifted east and south, eventually reaching Michigan, Ontario, Chicago, Poland, Ukraine, and Russia. A total of 116 campsites in the BWCA were affected by the fire, though many of the campsites, trails and portages have now been rehabilitated and reopened to the public. (A current list of BWCA campsite closures and the Pow Wow Trail update can be found here.) 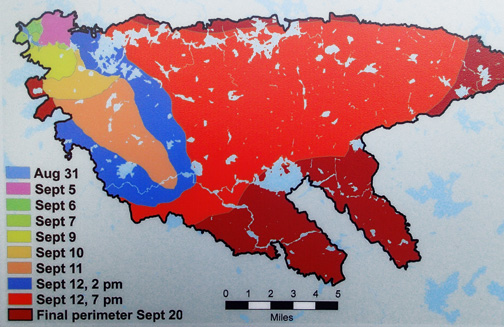 The next day we wanted to experience more — and decided to paddle farther east along the fire’s path, on Isabella Lake. This BWCA burn area can be reached via driving the Tomahawk Trail south of Ely, off Highway 1. Access to Bog Lake, Island River, the Pow Wow Trail, and Isabella Lake is via this route. The fire burned hot and intense here, even jumping the Tomahawk Trail road at one point.

There are many fascinating miles to paddle and explore along the route of the Pagami Creek Fire. Before you go, check out the links below and visit the Ely or Tofte Forest Service Ranger Stations. There you can talk to a ranger, get maps, and view their Pagami Creek Fire information kiosk. Most likely, the ranger on duty fought this fire and has a personal story to contribute to the history books — since it was an all-out effort to contain this fire when things turned serious.

A landscape altered by a fire of this magnitude changes quickly. Get out, see it now and this historical fire will come alive while you explore.

Outside Magazine has a riveting article about Greg and Julie Welch who had to flee in their kayaks as the massive wind-blown Pagami Creek Fire rushed toward them consuming tens of thousands of acres on one September day.

Martin Kubik has amazing photos and notes from his 2014 Memorial Weekend hike around the remote and wild Pow Wow Trail, through heavily burned areas. He says: “I backpacked the 32 mile long trail in 3 days crossing and climbing over 1,817 treefalls. Proficiency with map and compass is highly recommended, and GPS with a track as a backup—unless you intend to make it an ‘extended stay’ trip. Pow Wow offers unmatched solitude and despite destruction by the Pagami Creek Fire, it is a beautiful trail. Unlike three years ago when all wildlife was absent, I saw garter snakes, forest mice, grouse, many birds, bumble bees and knee-high jack pines. Yet it is a challenging trail, and best done in a group.”

Bill Gabbert’s Wildfire Today blog has many summaries from a knowledgeable writer about the fire, as well as good photos and video.

Friends of the Boundary Waters Wilderness website has a wide-ranging recap on the fire including eyewitness accounts by its communications director, videos, photos, print and radio media links, as well as information on fire impact on the ecology of the region.

And the best is saved for last: read the Forest Service’s “Pagami Creek Fire Entrapments Facilitated Learning Analysis” here. It reads like a great novel and recounts the life and death details as they unfolded for a handful of forest service staff on the day when the fire erupted and threatened to engulf them at Insula Lake. Complete with photos and maps, you’ll feel like you were there on that scary September day, and you’ll appreciate the effort these fine folks made to make sure all BWCA wilderness visitors got out safely ahead of the fire.