At 10:28am on Thursday, December 21, 2017, the North Pole will be tilted as far away from the sun as it could possibly get. It’s when the sun reaches its farthest southward point for the year, and when noontime shadows are the longest of the year. It’s also traditionally when humans celebrate a return to more daylight. Until June — when we reach the summer solstice and the sunlight starts to diminish, starting the cycle all over again.

We live where I can see the sun rise from the lake’s edge almost every morning. The beach of Park Point is my Stonehenge, against which I can measure the change of the seasons.

For the last six months since summer, the spot where the sun rises has been steadily moving from “left” to “right” along the big lake’s blue horizon.

In summer, the sun rises far to the north of actual east. That means when I walk “my” beach early in the day, the sun rises over the waters of Lake Superior, and I look out across the the lake to watch its beautiful colors emerge.

But on these early December mornings when I walk the beach, the sun rises over the beach far to the south, in the direction I’m walking on my shoreline stroll. The photo above is from late December here on Park Point.

As December 21 passes, the sun will stop its journey to the “right” (or south) and begin to come back to the “left” (or north).

You can watch this sun path yourself. While you might not have the straight edge of a Lake Superior shoreline to measure the sun’s seasonal movement, you likely have some other marker such as a field, a tree, or a spot in your backyard. 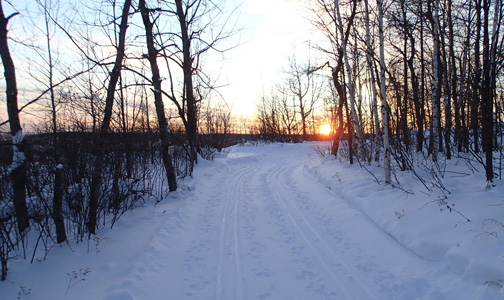 Start to pay attention to sunset and sunrise locations via your local landmarks.

On December 21, the sun will be as low to the horizon as it ever gets, even at “high” noon. There won’t be much warmth coming from our star today at its peak. Later on, check out the sunset. As you look to the west, you’ll see that the sun sets as far to the “south”, or left, as it ever does. From your kitchen window or your front door, remember that sunset spot…via the neighbor’s garage door, a tall building in the distance, or a fence post. On the North Shore, maybe you’ll note a ridge line or a tall white pine. From the beaches just east of Grand Marais, you might see the sun set straight down the shoreline. Wherever the sun goes down today, that’s a landmark for your life: your own personal Stonehenge.

Unique things happen in other part of the world, too. In the Arctic, December 21 is the one day that the sun does not rise anywhere north of the Arctic Circle and the day remains completely dark.

Of course, this is December on the North Shore and we might not see the sun at all. But we know, from a few thousand years of experience, that the sun will come back. Days will slowly start getting longer again. The sun will climb higher in the sky.

It almost makes you want to have a little party to welcome back the sun! Maybe, just to be sure the sun comes back, you could have a bonfire. Or burn a yule log. 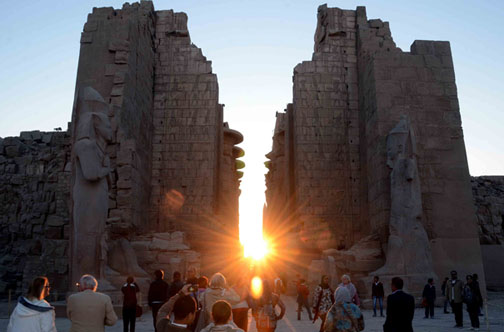 The sun rises behind an Egyptian temple during solstice.

No one is really sure how long ago humans started recognizing the winter solstice date and began heralding it as a returning point to sunlight. Many cultures have created holidays, festivals, gatherings, rituals and solstice celebrations around the December 21 date. At the core of these events is an ancient fear that the failing light would never return unless humans intervened with anxious vigil or big celebration. And most ancient cultures built astronomical observatories like tombs, temples, and cairns to align with the solstice date. From Chaco Canyon’s sun dagger in New Mexico to the Stonehenge archaeological site in England, there are amazing places that link this date. 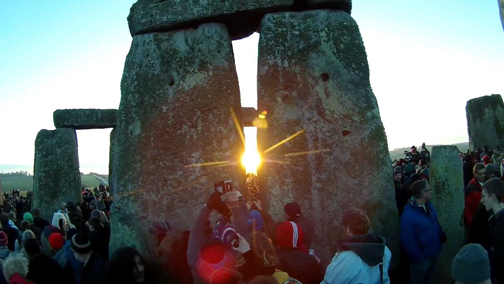 Locally in Two Harbors, you can enjoy an annual bonfire and community celebration of the shortest day of the year at the Two Harbors Lighthouse. Maybe it’s time to start your own tradition of welcoming back the light?