“Under a Flaming Sky” tells story of Hinckley fire

Under a Flaming Sky: The Great Hinckley Firestorm of 1894
By Daniel James Brown
Harper Collins Publishers, 2006

I have a morbid fascination with catastrophic fire. Perhaps it’s the purging and cleansing capacity of nature doing her thing, or maybe it’s that I’m ridiculously afraid of fire myself, or it could be that deep in my memory recesses and karma, I’ve actually experienced a big fire.

As part of this fascination, Andrew and I researched and canoe paddled some of the burned-over path of the famous Pagami Creek Fire a couple years ago. This fire is easily recalled by anyone living in northern Minnesota during the fall of 2011: the Pagami Creek Fire was devastating, amazing and huge—burning a record-breaking large acreage of BWCA land in a record-breaking short amount of time. It quickly burned out of control on a hot, dry September stretch of days and made for harrowing rescues, eventually leaving a huge swath of destroyed forest in its wake.

You can read about our paddling experience and see photos of the landscape taken three years post-fire in our blog post “On the trail of the Pagami Creek Fire.” While researching the Pagami fire I frequently came across comparisons to the Hinckley Fire of 1894. Both fires were huge, unprecedented, and created what experts term a “firestorm” event. Because they were separated by 100 years of technology and because one burned through a booming prairie town while the other burned through unpopulated wilderness, they told dramatically different stories once the flames flickered out. There was no loss of life in the Pagami Creek Fire when it burned through miles of lakes, creeks and uninhabited forest. In contrast, the Hinckley fire resulted in hundreds of deaths as it trapped 2000 residents and obliterated a once-thriving city.

Back to this book and this author.

My entire family recently read and deeply enjoyed the NY Times bestseller The Boys in the Boat: Nine Americans and Their Epic Quest for Gold at the 1936 Berlin Olympics, by Daniel James Brown. Imagine my delightful surprise to discover that Brown also earlier wrote an historical account of the Great Hinckley Fire of 1894. Turns out, Brown’s grandfather lived through this fire, so he has a very personal attachment to the story. As he writes in the Preface:

“On September 1, 1894, two forest fires converged on the town of Hinckley, MN, trapping more than 2000 people. The fire created its own weather, including hurricane-strength winds, bubbles of plasma-like glowing gas, and 200-foot tall flames. As temperatures reached 1,600 degrees F., the firestorm knocked down buildings and carried flaming debris high into the sky. Two trains—one with every single car on fire—became the only means of escape. In all, more than 400 people would die, leading to a revolution in forestry management and the birth of federal agencies that monitor and fight wildfires.

Forty years after the Hinckley firestorm, my grandfather still sometimes awoke in the night, screaming…..My grandfather would begin to thrash back and forth in his bed moaning, whimpering, and making the sounds of a frightened animal. Then, suddenly, he would sit bolt upright in bed with his eyes wide open, and scream.

Perhaps he was remembering, over and over again, how one day when he was nine, his father had simply disappeared into a maelstrom of fire. Perhaps he was seeing again the charred bodies scattered up and down the ashen streets of what had been his hometown. Or perhaps he was hearing again the terrible, low rumbling sound that had preceded any signs of flames, the sound of something large and unknown rolling toward him like a tidal wave.

Whatever it was, it must have rocked him to his core. This book is the result of my efforts to understand what happened to the more than 1200 other people who had the misfortune to find themselves in Hinckley, Minnesota, on the morning of September 1, 1894.”

Under a Flaming Sky tells the minute-by-minute account of how a firestorm roared through Hinckley—a story meticulously patched together by Brown and gleaned from survivor journals, letters, articles, and interviews. Once you turn the first page, you’ll be drawn into his story of recent immigrants and regular Minnesota town folk who ended up running for their lives with children and elderly in tow one hot September day.

Prior to September 1894, Hinckley was a heavily forested lumber town. After the fire burned everything in its path, it became prairie and farm land.

How difficult it must have been in 1894 to warn residents of impending disaster and beg for help by telegraph. It was the railroad running through this land, and company employees, who were responsible for any survivors. Two trains—one going north, once traveling south—became the only means of escape. It was a time of resourceful people and everyday heroes.

2000 residents were trapped by the fire and over 400 eventually died.

At moments, this is a difficult book to read, with its personal stories of families and loss. But it’s also a riveting, can’t-put-it-down piece of northern Minnesota history. I’m so glad I read it…and I’ll never think of Hinckley or the Grindstone River quite the same again as I blast by on I-35, traveling between Duluth and the Twin Cities. 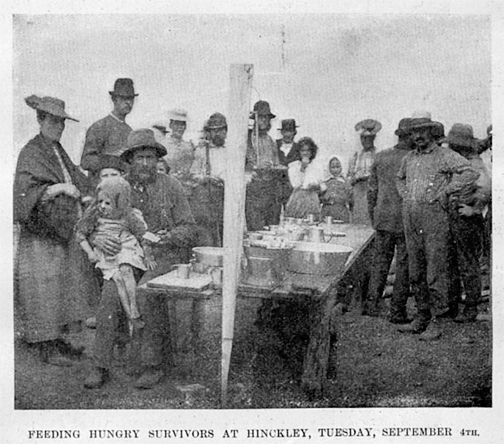 Those who survived the fire lost everything, rebuilding on scorched, bare land.

Under a Flaming Sky is storytelling at its best. It’s a moment in northern Minnesota’s history any who call this place home will want to read.

When you’ve finished the book, take a trip to the Hinckley Fire Museum in Hinckley, Minnesota, just off I-35. The museum is located in the former Saint Paul & Duluth Railroad Depot, rebuilt in the wake of fire to replicate the previous train station. Inside, you’ll see artifacts from the 1890s that made it through the fire and hear some of the many stories from that terrible September day, which remains one of the largest wildfire disasters in history.

Exhibits are open 10am-5pm Tuesday through Sunday; closed on Mondays, and the museum is closed seasonally from mid-October through mid-May.

Touching and somber, you can read the names and locations of 418 bodies found post-fire.

Young Jenny Johnson was covered in wet blankets by her parents and left in an open potato patch. She gripped the china doll shown here as the firestorm passed…and was saved.